ZUG, Switzerland. November 24th, 2022 — THE POLKADOT community is demonstrating its tireless commitment to stamp down on scams and frauds in the Web3 world by incentivizing its members to help them clean up the space.

The initiative began early last year, and has developed to provide a range of “bounties” for members of the network’s community who successfully flag harmful websites and phishing operations.

Web3 Foundation, the entity that nurtures and stewards Polkadot alongside other initiatives, formed a dedicated Anti-Scam department which has devised a method for distributing these bounties through the Polkadot Treasury.

Michalis Fragkiadakis, Anti-Scam Lead at Web3 Foundation, said: “The objective was simple: do what we can to protect users and make Polkadot a safe ecosystem. Simple in theory but tricky to accomplish, especially if you want to stay true to the Web 3.0 ethos and do it in a decentralized way and on-chain.

“Our efforts are not focused solely on taking down scam sites. Participants came up with ideas to utilize all tools at our disposal and expand the anti-scam activities in other areas.

“As such, when the Anti-Scam Bounty was created, it incorporated all these ideas as tasks that the community could undertake to help make our ecosystem safer. The bounty has given out more than 16,000 DOT in rewards to date.”

Beyond providing rewards for the community when they successfully detect scam sites, fake social media profiles and phishing apps, it also issues bounties to people who create educational material for users.

On top of that, wallets, exchanges, and antivirus companies are brought into the fold by integrating Polkadot’s phishing repo, and further tasks cover aspects such as protecting Discord servers from raids and creating an Anti-Scam Dashboard to act as the central hub for all anti-scam activities in the Polkadot ecosystem.

From the time the bounty started in March 2022 up to the end of October 2022, a total of 5,524 sites have been flagged as suspicious, with the vast majority of them being taken down.

Community members also have a list of scam sites in Polkadot’s phishing repo with all the domains they find during their searches - even if they are not targeting Polkadot and are thus not eligible for reward. As a result, the blocklist has grown from around 200 sites when the anti-scam efforts started in April 2021 to almost 14,000 entries by the end of October 2022. 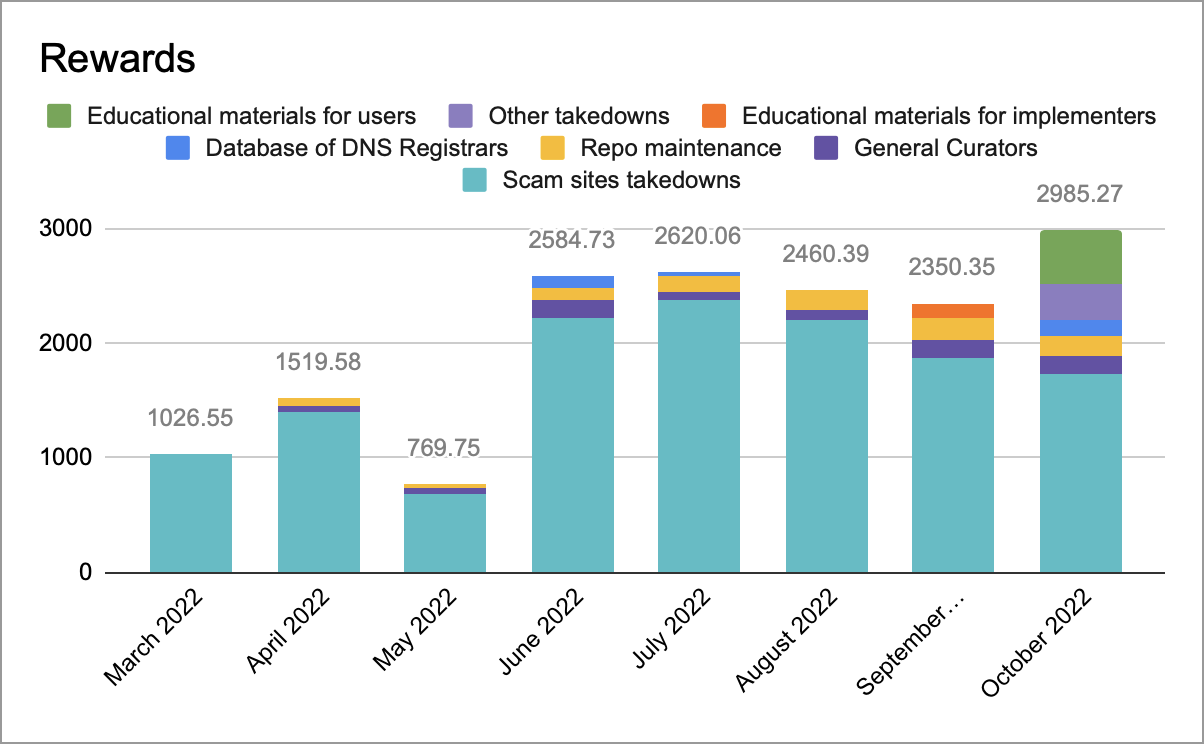 Fragkiadakis added: “Another important goal, perhaps the most important, is to increase our educational efforts to reach more people within, and outside, our ecosystem in new, innovative ways. This is a big undertaking that will probably never cease, but it’s the most effective way for long-term safety for our community.

“Education is the “silver bullet”, because if all users know how to protect themselves and avoid pitfalls, then all other initiatives become obsolete and we can all go home, scammers included.”